The terms of the coronavirus rescue package prohibit mortgage servicers from recording related forbearance as delinquent to the credit bureaus, but payment suspensions are driving other indicators on credit reports higher.

In the mortgage market, hardships were indicated in various ways on 5% of accounts in April, up from less than half of a percent, according to TransUnion. In contrast, serious delinquencies of 60 days or more in April inched down slightly to 1.27% from 1.4% the previous month and from 1.32% a year ago. 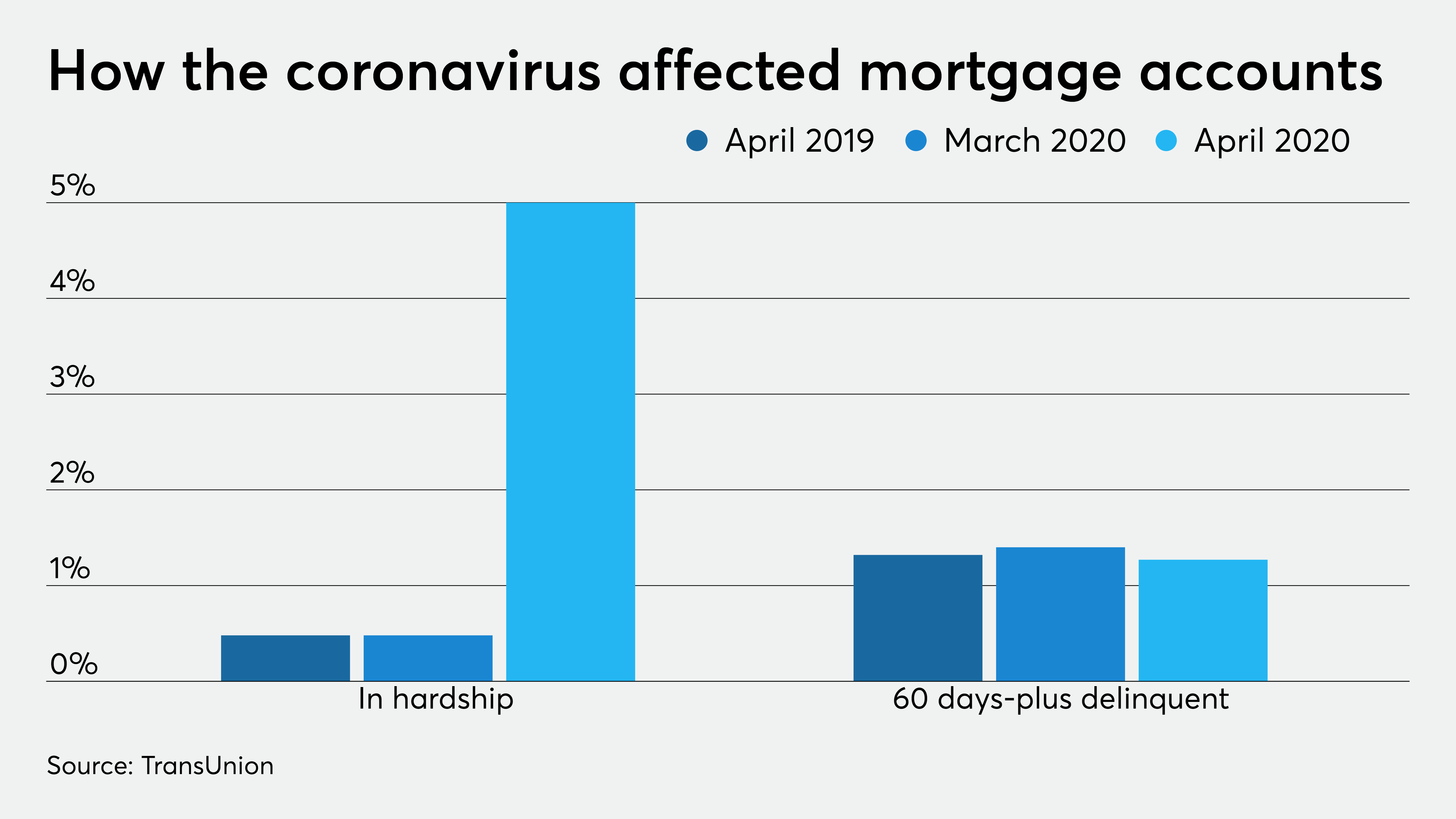 The hardships recorded don’t necessarily reflect coronavirus-related forbearance. They could also reflect – for example – deferred payments due to a natural disaster like the storms and tornadoes that have damaged thousands of properties in the Nashville, Tenn., area. However, given the coronavirus’ broad scope, it likely is the main driver.

“We can look at things like how much of that activity were we getting before the forbearance programs, and after, and that can give us an idea of how many were impacted by COVID,” said Joe Mellman, TransUnion’s senior vice president and mortgage business leader. “But it’s hard to be exact with it.”

While the prohibition on recording coronavirus-related forbearance as a delinquency removes a negative impact on the classic FICO credit scores the mortgage industry generally looks to in underwriting, it could have other implications for access to credit.

For example, regardless of whether lenders learn about forbearance from a credit report or through another means, suspended payments can affect consumers’ ability to qualify for new mortgages in the government-sponsored enterprise market, even with the GSEs easing some of its standards to accommodate the payment relief. Originally, the GSEs would not buy new loans with forbearance at all. Now they will, but at a price that makes those mortgages unattractive to lenders.

As a result, there is some concern that consumers who heard that the coronavirus rescue package requires their loans to be recorded as current on credit reports won’t realize that those forborne payments could still affect their ability to get new loans. They also may not know that policies related to that access to credit could change over time, as they have so far.

“It should have been disclosed that it is likely to be notated that you went into forbearance, and it could have an impact,” said David Stevens, CEO of Mountain Lake Consulting and former Federal Housing Administration commissioner. “I worry that without that disclosure, there’s been a false assumption among consumers that doesn’t reflect reality.”

Assessing the Fallout From the Coronavirus Pandemic – Ready To Use Conductive Textiles Market Industry Analysis, Trend and Growth, 2019-2021